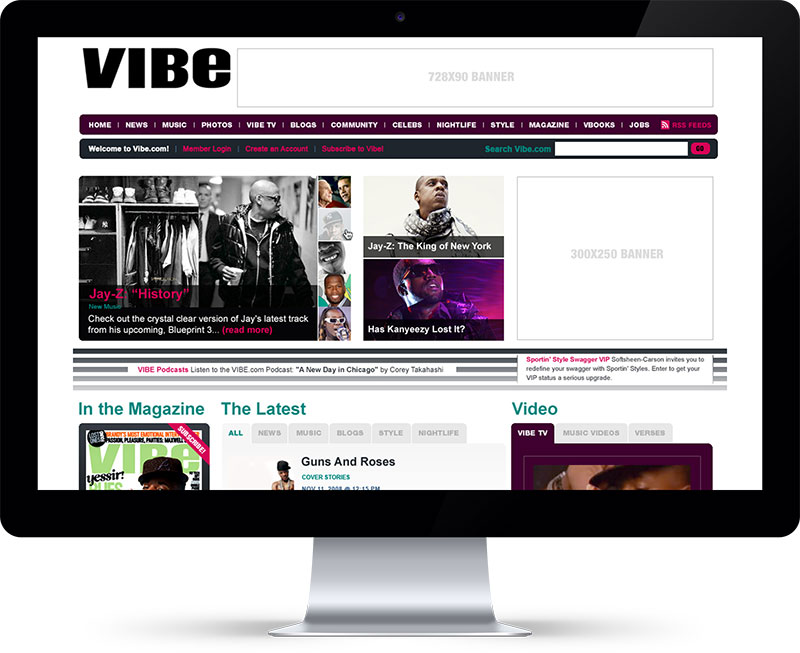 I was the Interactive Art Director of VIBE from December of 2006 to December '08. I joined the company as Senior Web Designer and was promoted to IAD after I led efforts to redesign the very outdated VIBE.com, which had previously functioned as just a subsidiary of the print magazine. My goal with the new site was primarily that it function as a full extension of the VIBE brand for readers of the print entity and a new population of internet users who may not ever pick up a physical copy. Design agency Pentagram led the magazine's redesign, and to ensure continuity, I used the new look as a style guide for the VIBE.com aesthetic.

My responsibilities at VIBE included art direction, design, and maintenance of the VIBE brand’s digital properties, including the aforementioned VIBE.com and VIBEVixen.com, which launched in tandem with VIBE Vixen magazine's debut. I strategized, designed, and/or oversaw all integrated ad campaigns, newsletters, digital marketing and promotional materials for companies including AT&T, Lions Gate Entertainment, Seagram’s, Tanqueray, Red Bull, Cover Girl, and Fox/Searchlight Pictures. I also served as creative liaison between sponsors, copywriters, and the digital media team, often sitting in on the editorial brainstorming sessions led by Editor-in-Chief Danyel Smith.

In additonal to the main digital properties, I also designed the 2007 VH1 Soul VIBE Awards minisite, the “Best Rapper Alive Tournament” 2008, THE MOST! Mag website, and the Vixen Verified Beauty Awards 2007 minisite. 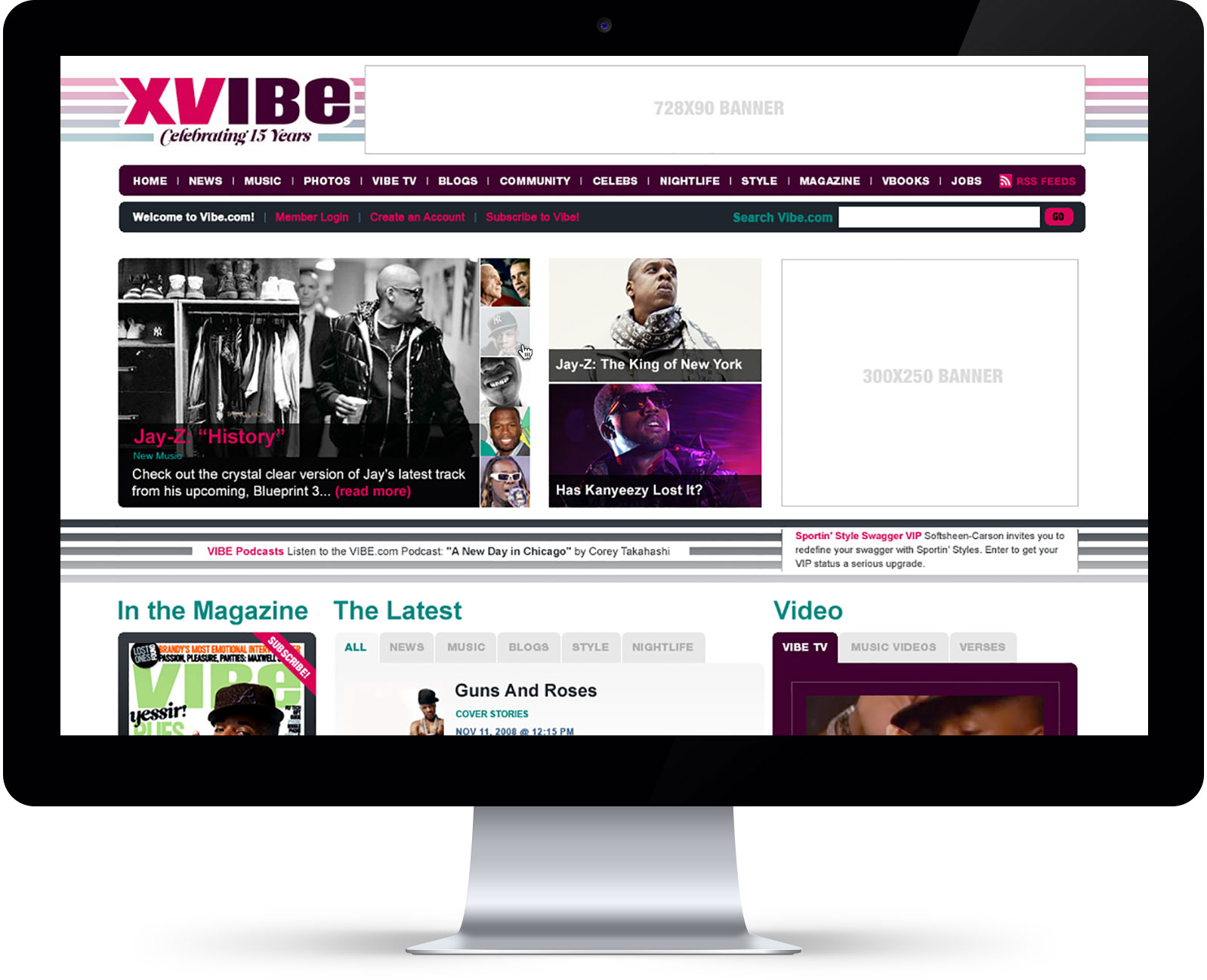 As someone who grew up reading VIBE, intoxicated by their marriage of provocative imagery and excellent, award-winning journalism, I was elated to be at the helm of the VIBE.com redesign. My team had a lot of freedom and our expertise in the digital space was trusted--that proved a very rewarding experience. The redesign resulted in a 50% increase in unique visitors and pages per visitor, increased ad revenue 20%, and traffic to over 9MM page views per month. 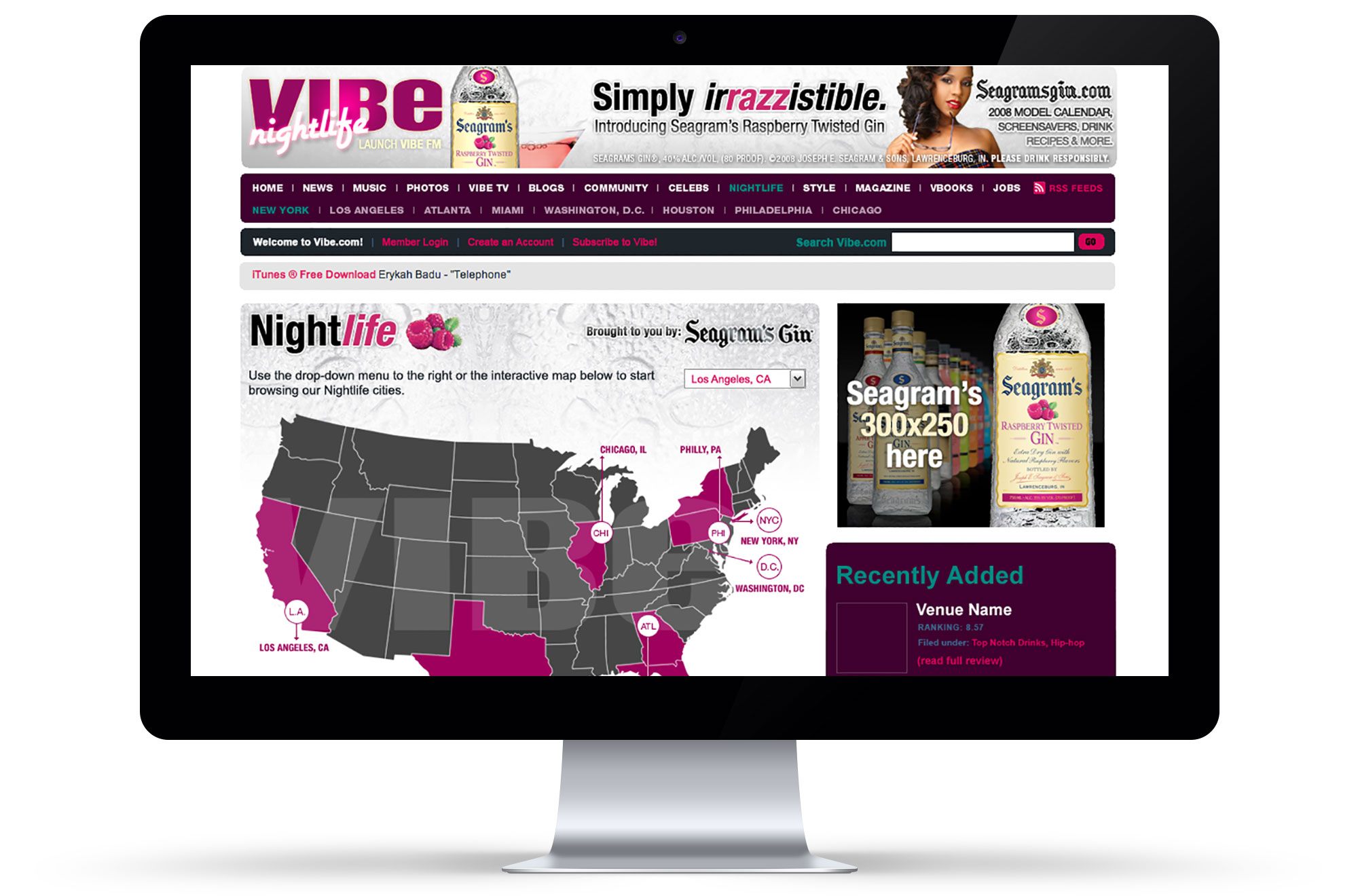 The Nightlife section, an idea pitched by Digital Director Ross Robbins, was one of many new sections we relaunched VIBE.com with. We really liked what NYMag.com was doing with their Nightlife section, and felt we could take some cues from their model. Enticing liquor brands with an opportunity to specifically target visitors within our demographic that were interested in restaurants, lounges, and clubs was the primary goal. We partnered with Seagram's Raspberry Twisted Gin, a new flavor, for launch.

A large part of my job as Interactive Art Director involved brainstorming with the Interactive Sales team on ways to entice potential sponsors. One of my most successful ideas was to offer "integrated headers" to companies that were looking for more than just traditional banner space. The integrated header, a few of which I've included above, was a full takeover of the VIBE.com header itself and included marrying the sponsor's assets and branding with the VIBE logo. This was a much more attractive option than simply a leaderboard ad and it proved to be quite successful and profitable. And as we designed all the headers in-house, I could also ensure that our quality level was being met. 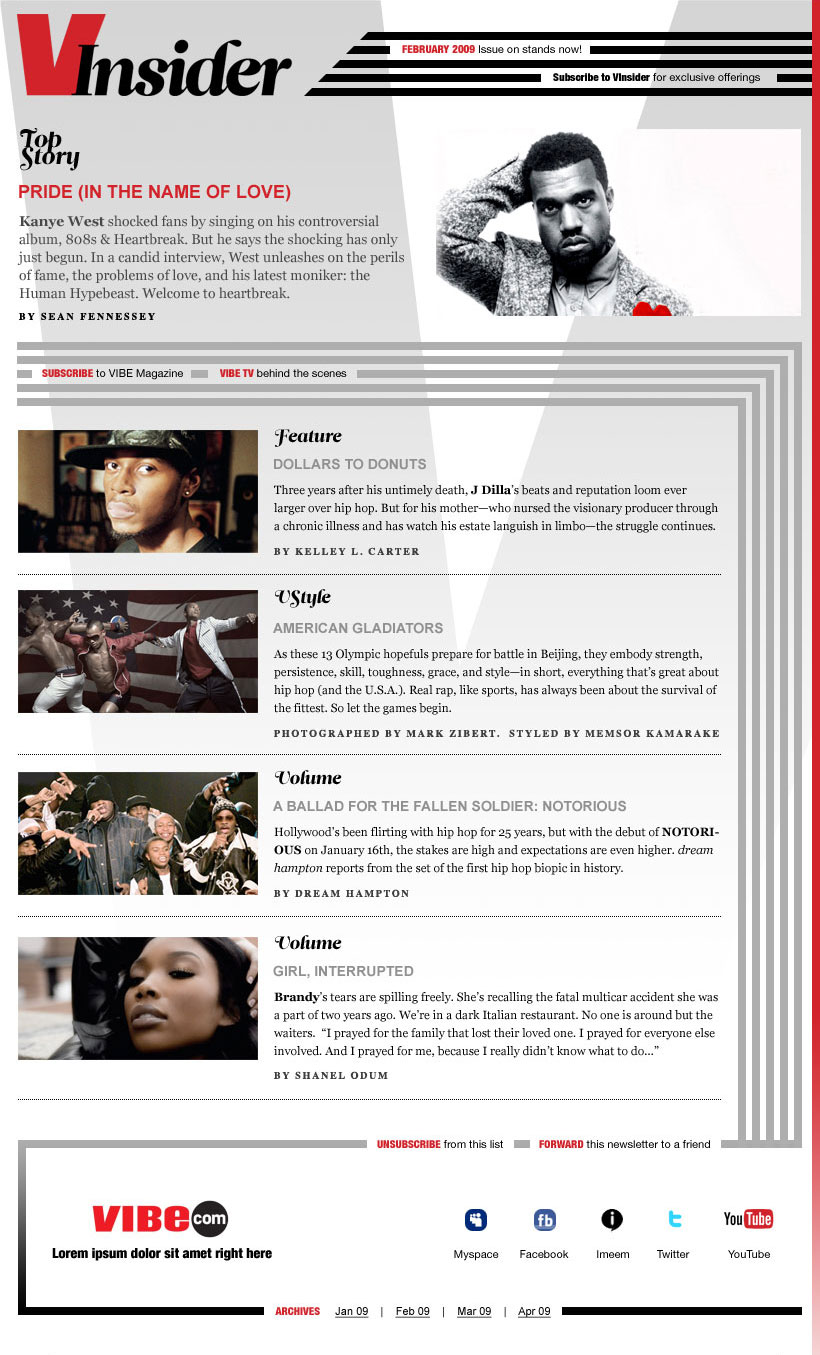 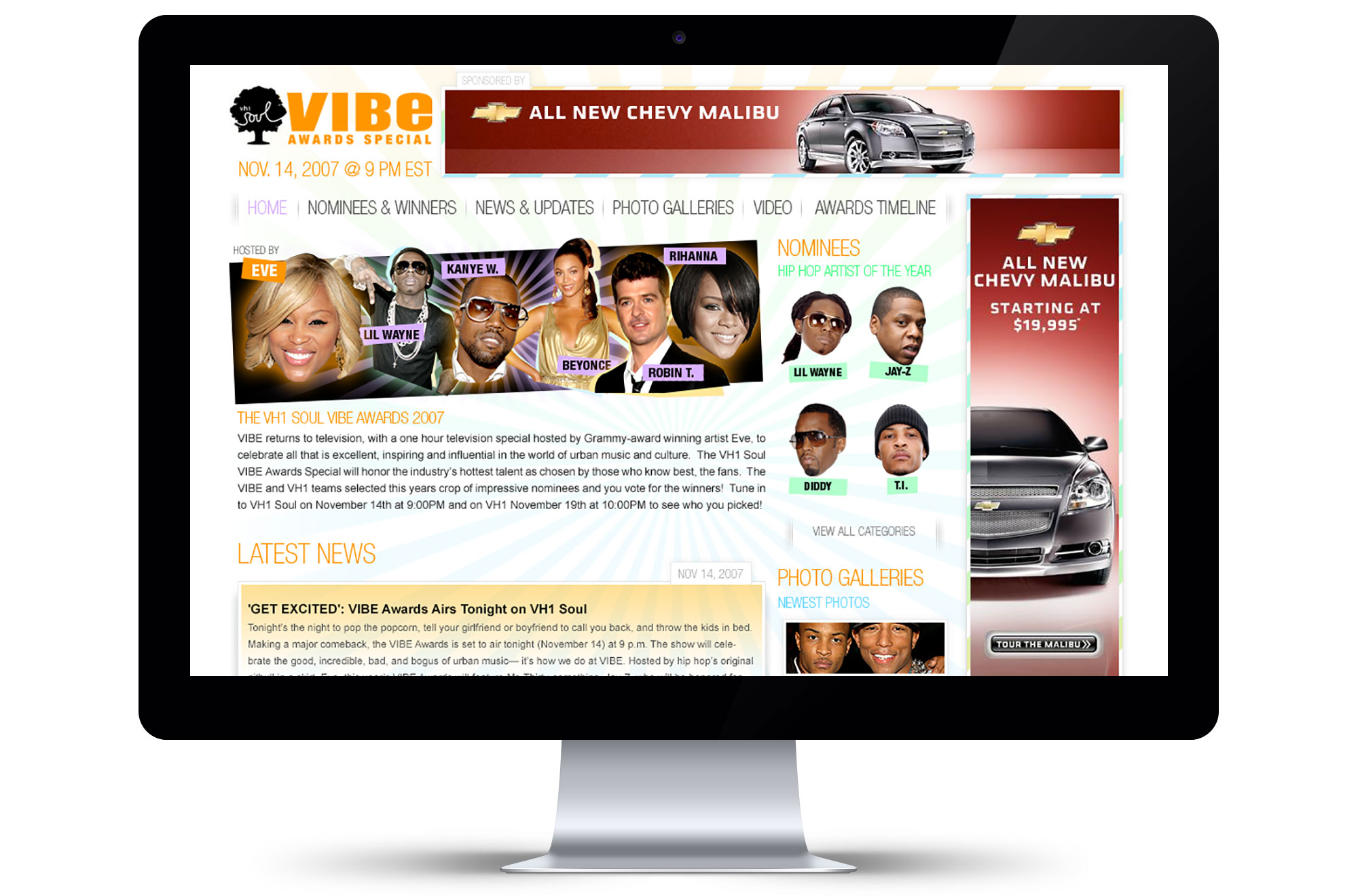 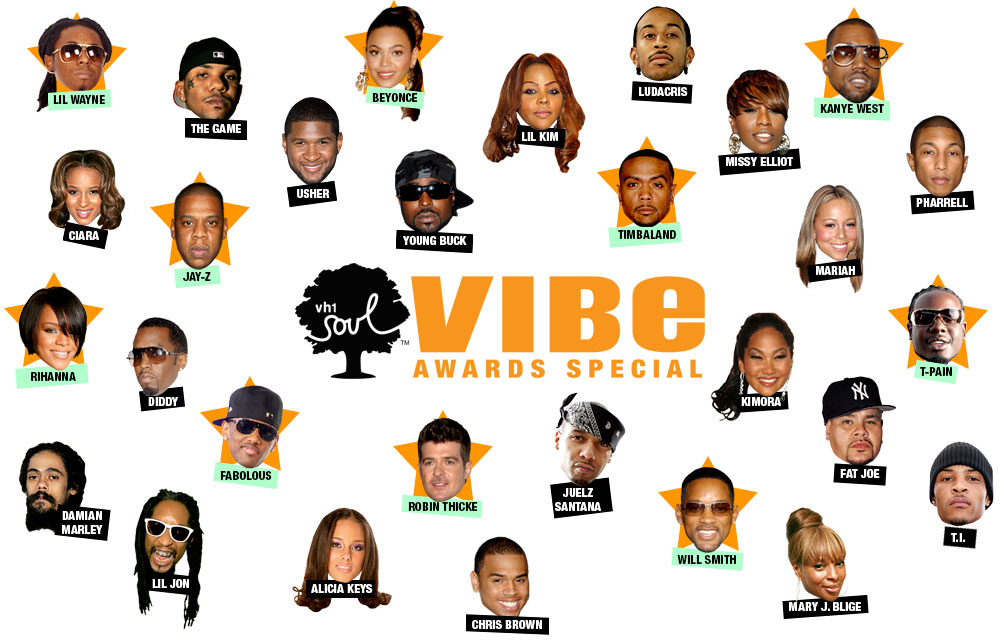 VIBE Awards 2007 microsite UI
THE MOST! 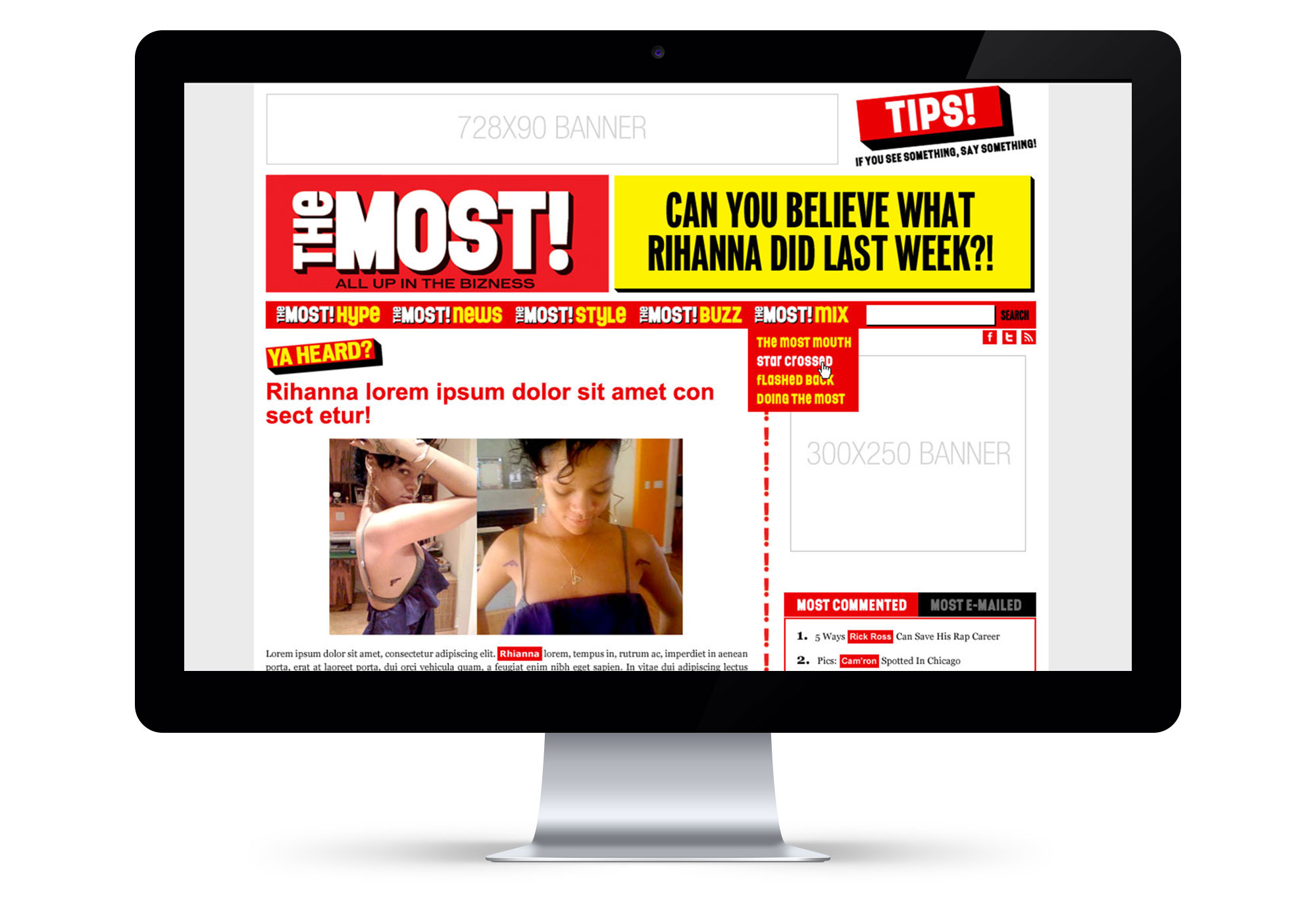 THE MOST! Mag was an unabashed tabloid spin-off from VIBE Media Group. With the tagline "All Up In the Bizness", THE MOST! covered celebrity gossip, style, beauty, and culture through a decidedly urban lens. VIBE folded very soon after the premiere issue hit newstands, and just days before themostmag.com launched, so unfortunately this site never saw the light of day. It was a blast to design it, however, and to go full out with bold, oversized, bright tabloid style graphics. 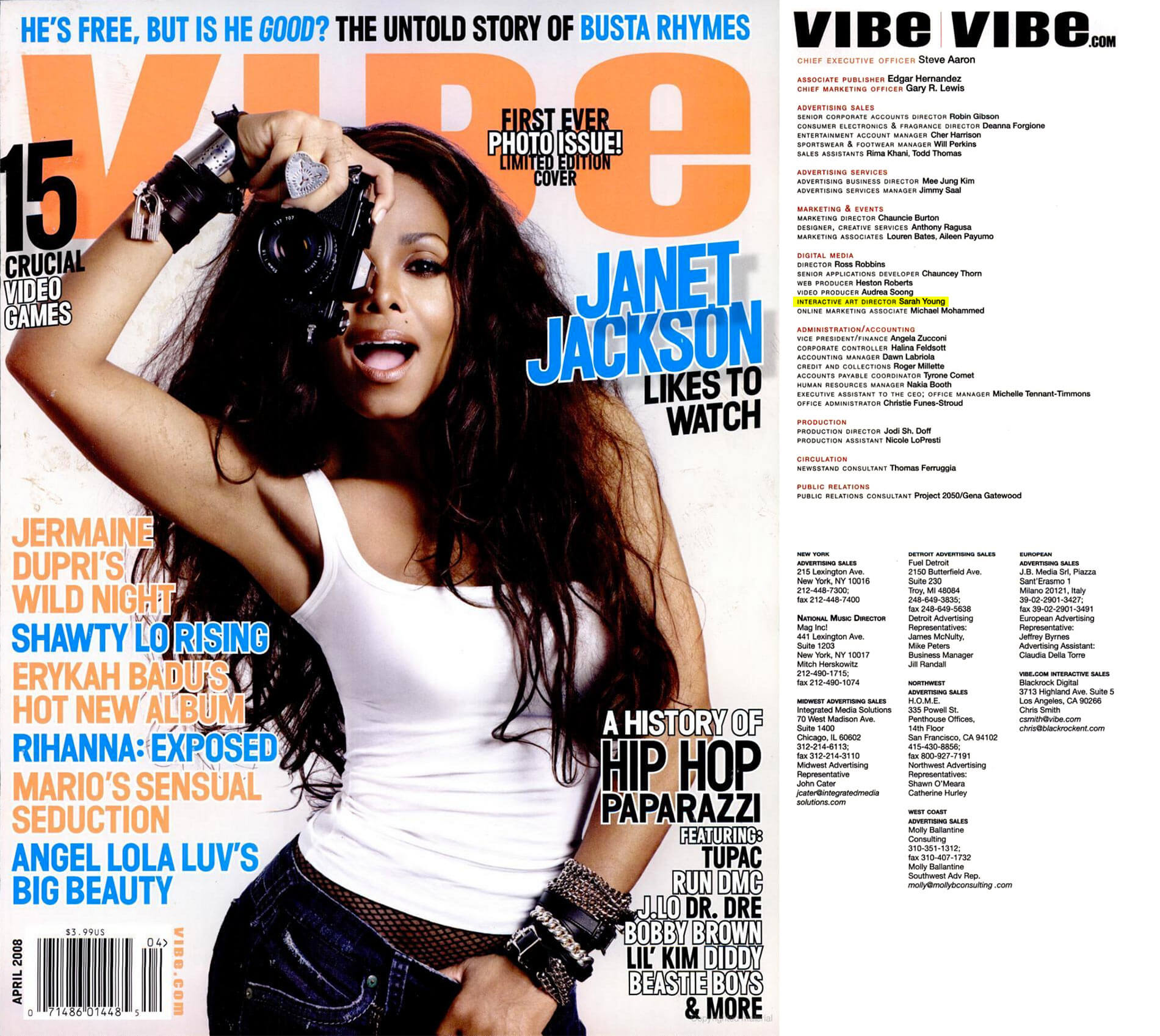 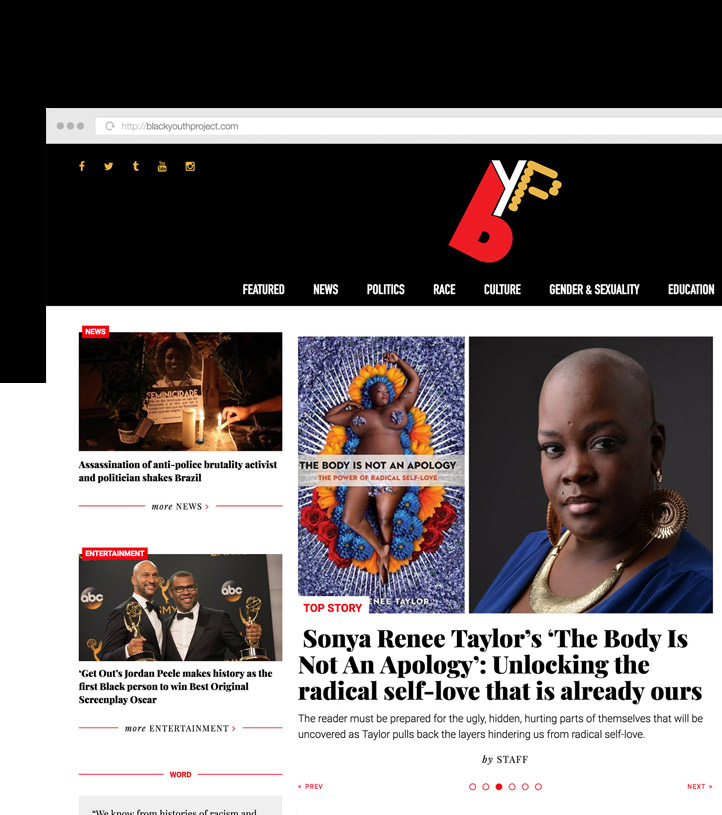 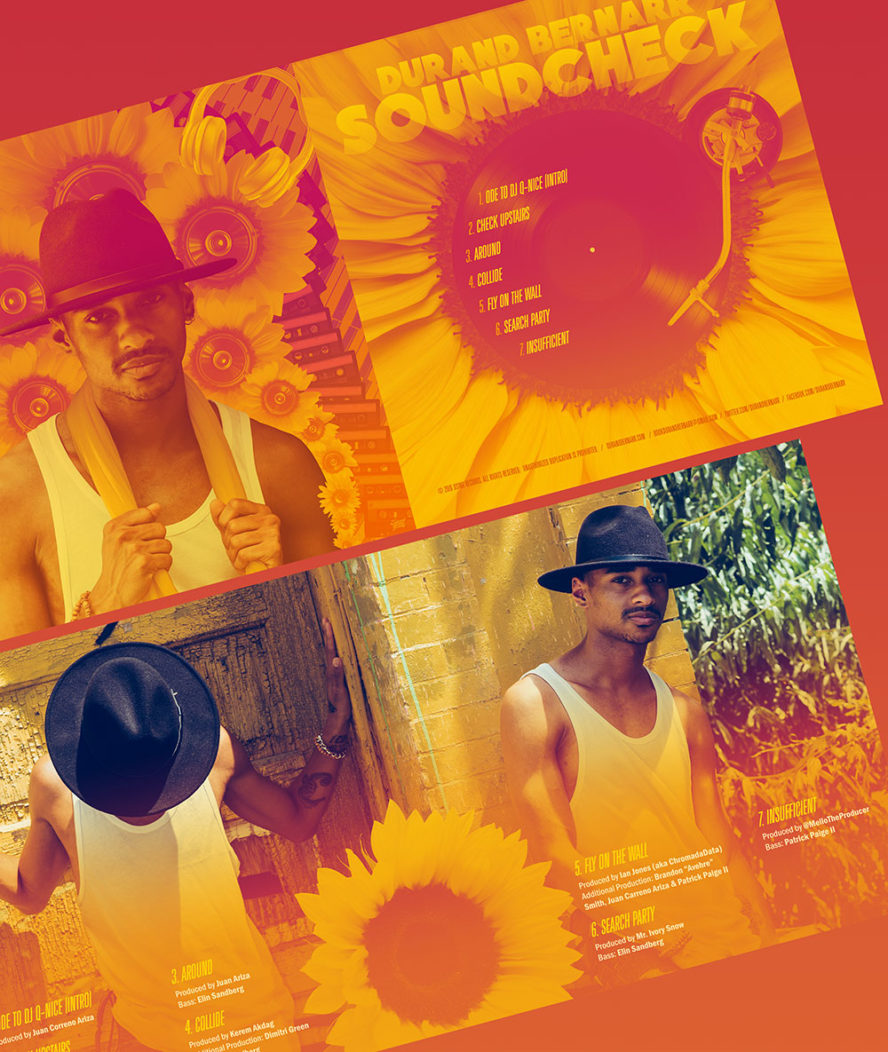 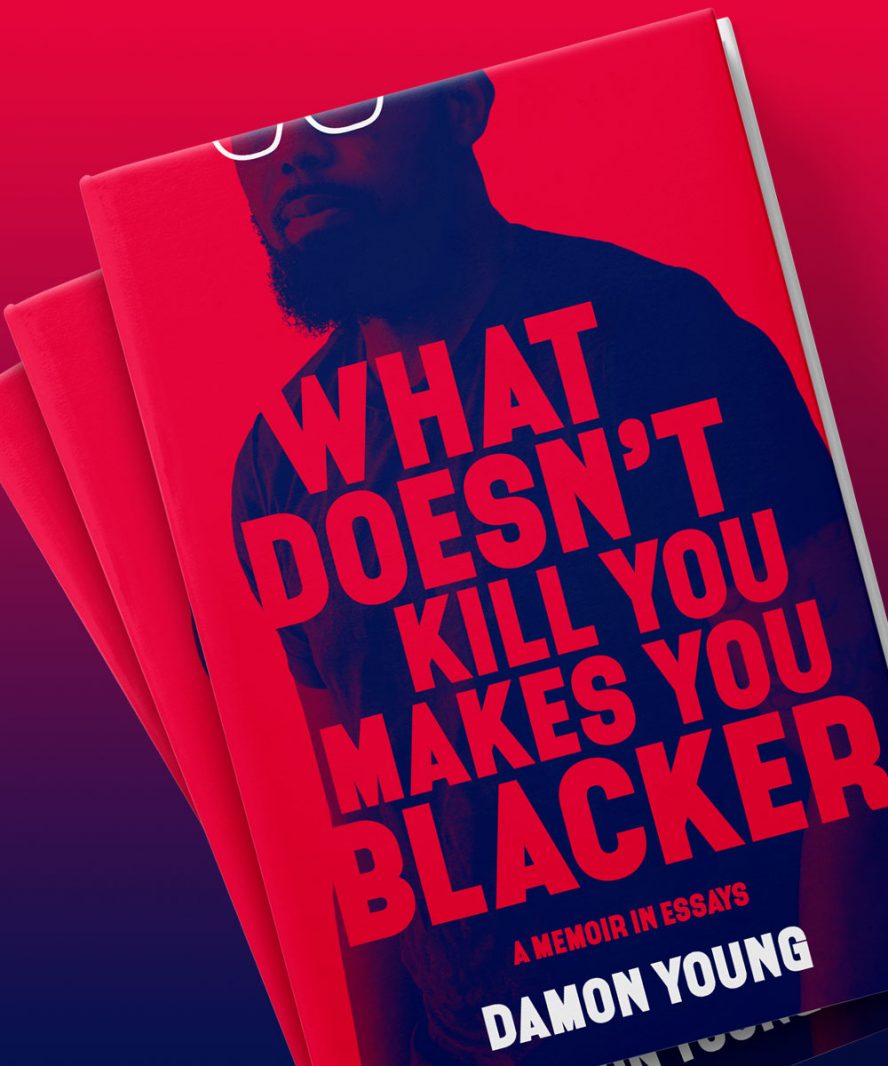 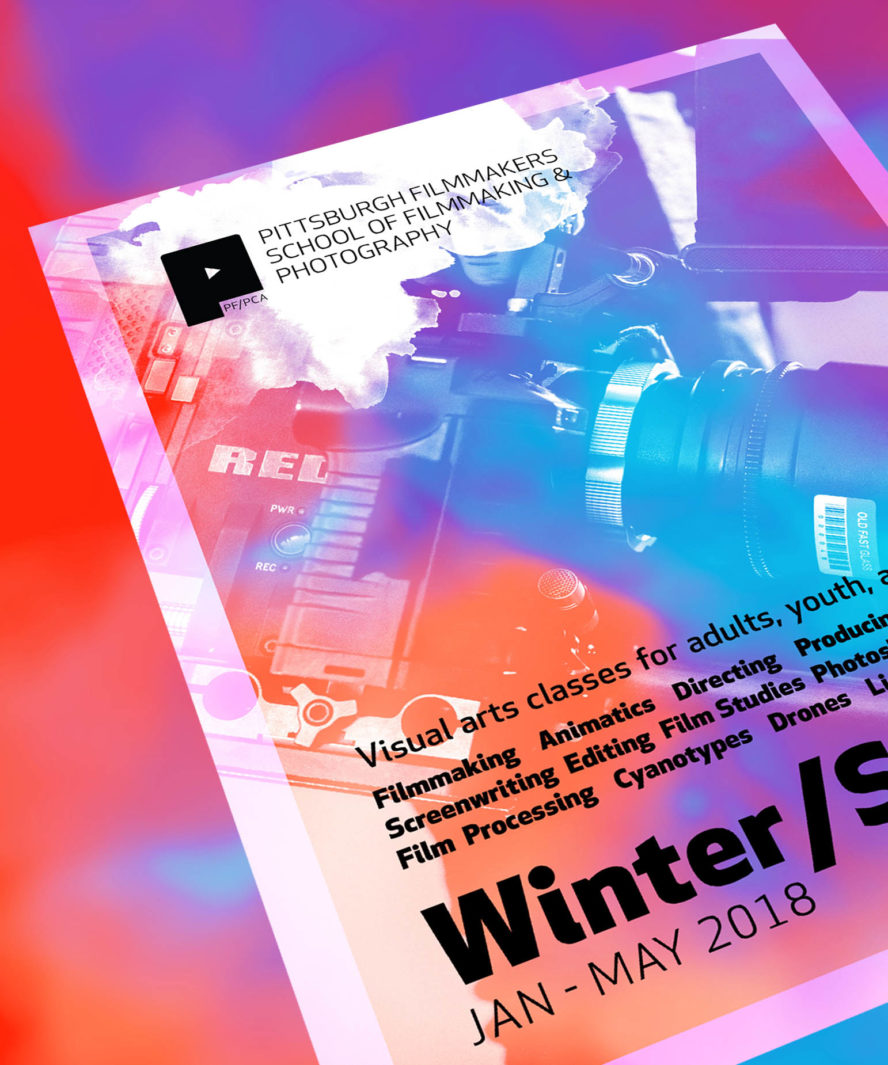